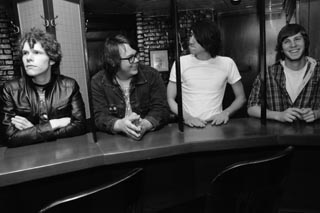 What's the meaning behind the band's name?
There really is no direct meaning behind the name.  We were in the studio and Lopez was listening to a lot of Lou Reed at the time.  More specifically the song "Berlin".  Since the band Berlin already exists, he brought Twin Berlin to the table and we just went with it.  It's funny because people have gotten really deep into the meaning of the name before, over analyzing what it means, but there's really nothing to it.
How the band started??
3/4 of the band grew up together in Connecticut and were already together in another group.  James met the guys in Boston and auditioned in the living room of an Allston apartment.
What's the message to transmit with your music??
We're not really trying to transmit any message.  We just want you to have a good time when you listen to us, or come to see us play.  As long as we can get your blood flowing or put a smile on your face, we're happy.
What's your method at the time of writting a song??
All of our songs were written by Lopez while locking himself in his closet with a guitar, drum machine and an 8 track.
Which are your music influences??
The obvious one is The Strokes and we're also very inspired by Kings of Leon, the Libertines and of course the classics like the Beatles.
What plans do you guys have for the future??
At this time, we're working on a new single "Don't Hang Around" which we've just recently debuted in our live shows.  There's not set date for the release, but it's in the process of being recorded now.  We'll keep everyone updated on our progress through our twitter (twitter.com/twinberlin) and facebook (facebook.com/twinberlin) pages.
Which has been the funniest prank you guys have been or took part while on tour or after a show??
We're not really much for pranks while on the road, but the city of Boston pulled a nice one this past year.  They decided it would be a nice gesture to tow our van during our set, so we finished playing and as all the bands were packing up for the night we realized that our van was gone.
If you guys were stranded in the middle of nowhere after a show or while on tour. The help is 65 miles away from where you guys are, ¿Who would you guys send to look for help? And if while the rest wait, there's no food and the only way to feed yourself is by eating each other, ¿Who would you eat first?
Either James or Lopez would have to go to get help.  As for who we'd eat...  Not Nate because he's a vegetarian so he wouldn't be too meaty.  Matt goes to to the gym a lot so he would probably be tough to chew.  So I guess it would come down to Lopez or James depending on who stayed.  But they're the ones who left for help, so while they're eating taquitos from 7-11 Nate and Matt would probably just starve to death.  But the average walking speed is roughly 3 mph, so assuming no one picked up Lopez and James it would take them 20 hours to walk to get help, then about an hour to drive back, so I don't think that it would have been long enough for panick to set in which would resort to eating one of the members.  Plus, if we did eat someone then we'd have to go on a search to replace them and it could just end up killing the band and no one wants that.
Which country you guys would love to play?
Australia.  I would love to go hop in a kangaroo's pouch all Joey-like.
With which bands you guys would love to share stage??
A Pete Doherty show would probably be really fun.
Are you guys OK, with the direction the band is going actually?
I think there is always room to improve and always a way to better your situation.
Check out more: http://www.facebook.com/twinberlin
Publicado por Vents en 9:56