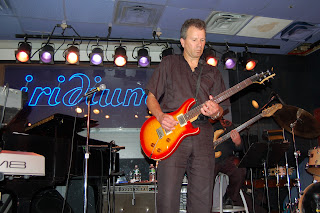 How did you started with all this??
I stopped playing for a while after music school (Hartt School of Music), started up again the last few years, recruited Steve Clarke, Dean Yalanis and Lobo and been getting the band out into clubs in Ct and NYC (Iridium Jazz Club was an important show for us) as much as possible to increase visibility and build our fan base.

What's the message to transmit with your music??
Our message is playing good quality jazz/fusion/rock music that appeals to people of different ages and who listens to many different genres.

What's your method at the time of writting a song??
The ideas for my song writing come from practicing which is usually late at night, as I am working through other tunes I am practicing a uniques idea comes up, I usually immediately put in in my roland 4 track so i do not lose the idea, i can go back and develop it later or right then if i chose, sometimes it takes weeks or months to come up with the other parts that make sense.

Which are your music influences??
I am influenced by many; Mike Stern, Larry Carlton, John Scofield, Stevie Ray Vaughan, Lynyrd Sknynyrd, Zepplin, Robin Trower,Charlie Parker, Santana, and many others

What plans do you have for the future??
My plans for the future are to continue playing clubs, promote the CD and get the band into some festivals next year, a European Tour would be awesome, need more contact overseas and a sponsor.

Which country you would love to play?
Would like to bring the band to either Japan or England at this point

If you were stranded in the middle of nowhere after a show or while on tour. The help is 65 miles away from where you and your band (If any) are, ¿Who would you send to look for help? And if while the rest wait, there's no food and the only way to feed yourself is by eating each other, ¿Who would you eat first?
If I had to send someone to look for help, I would send myself, I am the leader of this band, I would take responsibility, if there were no food, I do not think we would eat each other, would probably starve.

Which has been the funniest prank you have been or took part while on tour or after a show??
No crazy pranks to speak of at this time, Im sure there will be one at some point, we have a lot of fun playing together

Are you OK, with the direction the band is going actually?
I like our direction of the band, I think we have a great line up, need to keep getting the word out though playing out, festivals, more radio and on line presence.
My CD "Fire and Ice"  available on CD Baby has gotten some good reviews and I think we have something really good to work with.