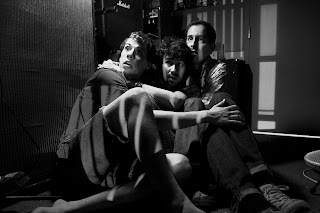 What's the meaning behind the band's name?
The fake story is that we all met on a skydiving trip where one member of the group, an unfortunate fellow named Geronimo, fell to his death. We decided to honor our fallen-comrade/total-stranger by learning instruments and starting a band called Batman. After a few shows, we decided to ditch Batman and start a new band called Geronimo!, in honor our the Native American hero Crazy Horse. The real/boring story is that Geronimo! was the best name we could think of at the time.

How the band started??
That's pretty boring too. We all grew up in the same town and played music. Our drummer Matt Schwerin approached me about starting a band. I lived with guitarist Kelly Johnson at the time and we jammed in our dingy basement. The chemistry between the three of us seemed really good and blah blah blah...

What's the message to transmit with your music??
We don't have a message really. We like playing loud fuzzy rock. We try to keep politics and religion separate from what we're doing musically. We all have opinions of course, but that's irrelevant when it comes to playing rock music. We just want to play loud.

What's your method at the time of writting a song??
Often ideas for songs will come from jams. We usually have a cheap tape recorder going when we jam so we can go back later and pick out parts that we like and fuse them together. Other times, songs just organically come together in like 20 mins. That's a much better feeling because we're not fighting each other over the course of 4 practices on how a particular transition should go.

Which is your music influences??
We all have different influences, but I think the main points we agree on are Radiohead, The Magnetic Fields, Built to Spill, Guided By Voices, Sonic Youth, maybe a few others. We also love Taco Bell. That's a big influence really, we'll go to great lengths for some Taco Bell. And fudge cookies.

What plans do you guys have for the future?? We're finishing up writing for our next full length. The goal would be to have it our sometime late next year. Beyond that, I plan to continue eating on a regular basis, probably drinking some water and booze in there, coupled with a healthy regiment of sleep. I also have a job, so I'll probably be there from time to time, who knows?

Which has been the funniest prank you guys have been or took part while on tour or after a show??
The funniest prank we pulled was on ourselves. We almost hit a kitten on tour in Texas, so we decided to pick it up and prevent it from getting hit by the next car. After about 5 minutes, we all fell in love with it, named it, and Kelly vowed to adopt it. So, with a week left of tour, we lived in our van with a kitten that would soil itself regularly and would never ever ever ever be quiet. Joke's on us! The little guy is almost all grown up now by the way, he's a good cat.

If you guys were stranded in the middle of nowhere after a show or while on tour. The help is 65 miles away from where you guys are, ¿Who would you guys send to look for help? And if while the rest wait, there's no food and the only way to feed yourself is by eating each other, ¿Who would you eat first?
Luckily, we buy a ton of cheap groceries while on tour, so that would never happen. The fudge cookies would go first though, if you must know. BBQ chips would fall next. They always do.

Which country you guys would love to play?
Personally, I'd love to play in France. I can't really say why, it just seems like a cool place. I haven't spent much time out of the states so anywhere would be great honestly.

With which bands you guys would love to share stage??
Well, I think we'd love to play with Nirvana circa 1991, "White Album" era Beatles, or "OK Computer" era Radiohead. Without a time machine, I think Radiohead is still a strong competitor. More realistically (and still dreaming), Battles or Menomena would be amazing bands to play with. There's always Raffi too. Love that guy.