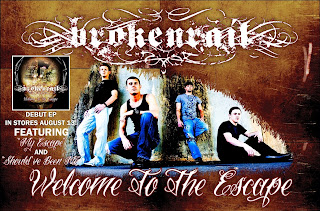 What's the meaning behind the band's name? Me (Blake Clawson) and the lead guitarist (Jacob Fine) are the founding members. We wanted to have a name that represented both of us. One cold night while partying around a bonfire in Fall '08, Jacob looked over to me and asked me what the first real song was that I learned on the guitar. I thought about it and replied "Runaway Train" by Soul Asylum. Jacob got excited and replied "Mine was Dierks Bentley's 'Train Travelin' ". From that point on we knew we wanted our name to have something to do with a train. We decided on BrokenRail as we felt it best represented our sound as well.

How the band started?? Me and Jacob started by playing acoustics at parties and fires in the fall here at Auburn University. After realizing the talent, we decided to start a full-on rock band.

What's the message to transmit with your music?? Our music expresses our current feelings, moods, or personal life experiences. In most songs, they are a way to help someone in a similar scenario. Our main focus is to be the music people turn to to get through life, whether through bad times, fun times, or great moments. We have a song for it all!

What's your method at the time of writting a song?? It all begins with a guitar riff either by me or Jacob. We then start breaking it down and begin vocals. Once the rhythm guitar and vocals are completely finished, we go full band and begin bass parts and finally add in drums. When we head to studio we always end up changing parts which helps shape the final "live" version as well.

Which is your music influences?? Our influences are vast and each person has a completely different musical background and taste. Our overall sound though comes from influences through 90's grunge bands, late 90s alternative and hard rock, and trends of modern rock such as Saving Abel, Seether, Theory of a Deadman, Hinder, etc.

What plans do you guys have for the future?? Releasing our debut album through a huge producer and national tour with major acts of our genre. We are in touch with producers such as Elvis Baskette (Alter Bridge, Chevelle), Skidd Mills (Saving Abel), Howard Benson (Theory of a Deadman, Skillet, Seether) and have already recorded with Rick Beato (Shinedown, Crossfade, Submersed). We really want to take our sound to the next level through the expertise of these recording geniuses.

Which has been the funniest prank you guys have been or took part while on tour or after a show??  I can't think of any pranks off the top of my head, but while we were recording in Atlanta with Rick Beato, we went out for some drinks after a long, successful day and when we got back to the hotel room Joel, the bassist, went and ran, jumped on the bed flipped off into the wall, and was completely stuck between the wall and the bed where we left him as we laughed for a while. We had to literally pull him out haha.

If you guys were stranded in the middle of nowhere after a show or while on tour. The help is 65 miles away from where you guys are, ¿Who would you guys send to look for help? And if while the rest wait, there's no food and the only way to feed yourself is by eating each other, ¿Who would you eat first? Ha probably me. If the others three were left alone and starving, I'm guessing they would eat Joel, the bassist. Hopefully, I'd run across a McDonald's on the way for help!

Which country you guys would love to play?  UK...We really hope to tour there one day. We were offered a label in London where we would move there, but we would just rather visit and keep our base in the US.

With which bands you guys would love to share stage?? AlterBridge, Theory of a Deadman, Godsmack, Saving Abel, Hinder, Puddle of Mudd to name a few.

Are you guys OK, with the direction the band is going actually? Yes. We really just wish our home state of Alabama was more catering to original rock. All the major venues are reserved for cover bands no matter how good you are. We keep pushing forward though despite this.