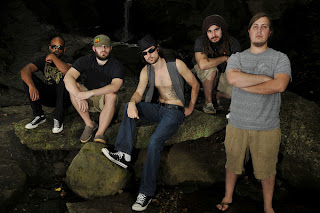 What's the meaning behind the band's name?
The meaning behind the name is simple. One of our guitar player's name is Daniel and we are about putting out good vibes and uniting people under the umbrella of music. So the Lionz part comes from Daniel in the Lions den and the Zion part is about the vibes and recognizing the rasta lifestyle. We mistakenly get asked if we are a "strictly reggae" band a good bit, but we are a mix of genres as you can hear and don't consider ourselves to be under a specific label. We just do what we do and have fun doing it.

How the band started??
This is likely the millionth time you've heard this, but in a garage. Drummer Ryan "Dr. Luv Beatz" McCarthy's to be exact. We started with Daniel on guitar, Ryan on drums and Josh on vocals, then added Rob Wild on bass. Tragically after our 2nd show, Rob passed away in a car accident. The search commenced for a bass player and after a few phone calls, Brian "Hootie" Jeter emerged like a beautiful phoenix destroying bass lines. Finally we added Wes Treadway on guitar to give it a nice full sound and viola the Lionz of Zion.

What's the message to transmit with your music??
The message we like to send out with our music is: just be who you are, stay true to yourself and lets the good times roll in. Our shows are more like parties; big, energy driven dance parties.

What's your method at the time of writting a song??
It's different all the time. Usually someone will come into rehearsal with a riff or beat and then we play off of that. Generally we like to jam in our songs, so there's always gonna be some face melting guitar solos and jaw dropping bass lines. Our bassist Hootie loves writing songs in off time signatures, so you may notice some unexpected changes along with other surprises in our songs. Keeps the fans on their toes and they love it!

What plans do you guys have for the future??
We plan to record our first full length in a few months. We have 2 EP's out now, "A New Reign" which is our latest is out on iTunes. Also we plan to break into the major festival scene, as they has been our greatest success up to this point. We would love to tour with some like minded musicians and share our music with the world. Hear us, love it and contact us.

Which has been the funniest prank you guys have been or took part while on tour or after a show??
Once we announced to the audience that we had free merch at an upcoming show, then dropped about 1000 packets of Kool Aid with our band info on them. It actually worked and we gained a few hundred fans from that, come to think about it. Not the greatest prank but effective!

If you guys were stranded in the middle of nowhere after a show or while on tour. The help is 65 miles away from where you guys are, ¿Who would you guys send to look for help? And if while the rest wait, there's no food and the only way to feed yourself is by eating each other, ¿Who would you eat first?
We would most definitely send Josh our singer. He is a human mapquest and is batting 1000 in getting us where we need to be and most of the time, on time. We would have to eat Hootie, nothing like some dark meat!

Which country you guys would love to play?
Austrailia, Japan, Europe in general. Europeans really love and appreciate music.

With which bands you guys would love to share stage??
We love the RX Bandits, Mars Volta and Red Hot Chili Peppers. Any one of those would be a dream come true.


Are you guys OK, with the direction the band is going actually?
We sure are! We are enjoying our regional success right now and hope to continue to grow and open eyes and ears to something original. You can hear us at www.facebook.com/lionzofzion or www.sonicbids.com/thelionzofzion2.
Publicado por Vents en 11:30