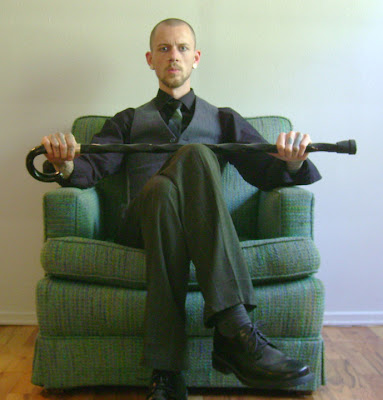 What's the meaning behind the band's name?
Intergalacterrorist is a play on words. If there is meaning behind it, it is partially because our culture is so fixated on terrorism and also because of what many might refer to as 2012 syndrome (Mayan calendar, apocalyptic scenarios, etc). Before I even began playing guitar or programming synthesizers, I was writing poetry, so I've always gravitated towards words and word play. Intergalactic + Terrorist seemed, to me, like an accurate description of some of the music I make. It can be both psychedelic and mind-warping and also, at times, terrorizing, because I try to work, purposefully, with frequencies that startle the brain (and I also use a LOT of distortion).

How the band started??
I first started producing electronic music in my early teens on computers. This was during the PC tracker days, so everything was based on the software used by the first video game designers to produce video game "soundtracks." I think, if I remember right, I first started using ScreamTracker, and eventually found my way to ImpulseTracker when my family could afford a computer that had an actual 16-bit sound card in it. I began programming in BASIC at like 8 or 9-years-old on an IBM PcJR. Were talking an 80x86 processor with 64kb of memory! At the same time I was pounding away on the piano when my parents could handle it--at some point the synthesis of the two worlds happened and instead of spending 6 hours a day programming variations of the "Nibbles" game in BASIC, I started punching notes and samples into trackers. After several years of doing that and playing in hardcore punk bands in high school and college, I finally graduated to a wavetable synthesizer when I was about 20 or 21. After that I got a hold of a monosynth, and started building up to the studio I have today.

What's the message to transmit with your music??
Well, the short answer: Life is short; meanings and belief systems are endless; have a good time on this planet and try not to be a jerk while you're doing it. The long answer...there is more than meets the eye to this existence. We can choose to emanate light, or we can choose to emanate darkness. In my opinion, most of our reality is based upon fictitious dichotomies, and I'm trying to persuade the listener to perk their ear up for the message between the lines, the grains between the sand, the conductor chiming "All Aboard!" for the intergalactic magic carpet ride down into Ginnungagap and back. Don't hesitate. Leap.

What's your method at the time of writting a song??
It varies. Sometimes it depends on the weather, the news, my own state of mind. Sometimes I hear a bird chirp, then drive 100 miles out into the woods to record the "perfect" sample of a bird in the wild (which I did once, for real). I might overhear a conversation about someone's fear of losing their job on the commuter train and go home to my studio and find a sound that evokes that state of being. Much like poetry, I try to incorporate everything I observe and take in on any given day. Then I sit in the studio with my thoughts and tools and begin experimenting...sometimes it starts with a solid beat that I lay down, sometimes it starts with a really good bass line. I find, however, that the best music I've made recently hits me like lightning, like an alien transmission; a harp string plucked in deep vacuum out beyond Deneb or Altair or Vega...and the reverberation somehow just manages to find its way to my ears and I do my damnedest to re-create or interpret it for human ears.

Which is your music influences??
I could write a 1,000 page book to answer that question. But in a nutshell...everything. I've listened to just about everything from the Estonian composer Arvo Part to black metal to hip-hop to zydeco. I don't believe in limiting one's exposure to music. There is always something new to learn or incorporate into your own personal taste and style from music all over the world. But, if I were to have to name a few of the most influential, the list would include: Skinny Puppy, SUNN O)), Future Sound of London, The Orb, Crash Worship, Krzysztof Penderecki, Coil, my homies in Pan!Zen, and on and on and on...

What plans do you guys have for the future??
Well, I'm at work on my second full-length right now. I released the first last year in conjunction with the presidential election on 1.20.09. Listening to it in retrospect, it sounds pretty amateur and I'm really trying to push for a more polished sound right now. Other than that--really just focusing on playing out more and hopefully getting some exposure at Winter Music Conference and South by Southwest this winter. And hopefully, if I play my cards right, a bunch of festivals and shows next summer.

Which has been the funniest prank you guys have been or took part while on tour or after a show??
I'm not sure. I think it has yet to happen since I'm a one man show...and the only prank I've ever pulled (once) was getting a little to tipsy to remember why I was on stage in the first place.

If you guys were stranded in the middle of nowhere after a show or while on tour. The help is 65 miles away from where you guys are, ¿Who would you guys send to look for help? And if while the rest wait, there's no food and the only way to feed yourself is by eating each other, ¿Who would you eat first?
I would definitely eat my left arm first. But it's more likely that I'd find a way to get by. I lived in Alaska for a few years and have survived living and working in some of the most extreme climates (Arctic, high desert, and Antarctic) so I'm pretty confident I'd find a way to get by before resorting to cannibalism.

Which country you guys would love to play?
All of them. But, first on the list is England/UK and Germany. The American electronic music scene has a really bad habit of becoming pigeon-holed and genre obsessive. One genre seems to dominate over the rest at any given time. Right now, it's dubstep. In 2 years, it could be electro house again. It's hard to say. Wherever they are welcoming of the most diversity of electronic music, that's where I want to play next. And at some point, I would love to go back to Russia to visit friends there and play in Moscow and St. Petersburg (one of my favorite cities on earth). Peru, most definitely! And...well, kind of like my influences: there are a lot of places I hope to play someday.

With which bands you guys would love to share stage??
A black metal band, a hip hop crew, a jug-band, and a crazy homeless guy with a trumpet. Haha! Seriously though, *ahem* -- I'd like to get out there with anyone who wants to go for it all the way, and not just try to look cool, but really have a good time with music. But really, I just want to open for Pink Floyd's Dark Side of the Moon tour, circa 1972-73.

Are you guys OK, with the direction the band is going actually?
I don't know, are we okay guys? I suppose the answer is yes. I made myself a promise to push my music harder this year and I've done so. After I left Gradual Meltdown in 2007 (with an amazing final performance on the bone-crushing Root Society sound system at Burning Man 07), I spent almost 3 years crafting my own sound all over from scratch. I went out for more exposure, more gigs, and got my own record label off the ground this year. So I think, all in all, it's only going to get better (fingers crossed).