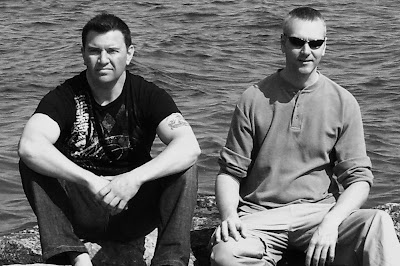 Brian came up with the idea of the ocean being big and blue. We both like hanging around the beach so it made sense to us. The 'X' was added to avoid confusion. We were at one point going to call ourselves The Ocean, but it never really stuck with us the way Big Blue X does.

How the band started??
I put an AD in a musicians classified magazine back looking for a singer. Brian was the only guy that answered, he showed up at the first rehearsal with a case of beer. I figured he was wasting our time, until I heard him sing. The other band members eventually went their own ways and we just kept writing songs and jamming on the acoustic guitar.

What's the message to transmit with your music??
There's a few underlying concepts, the main one is WAKE UP, the powers that be don't care about you, the animals or environment. They just don't care and they have the power because everyone is in their own little world half asleep. So we write songs about this stuff because we're pissed off and angry, and then we wonder why we even care ourselves half the time, but it keeps us out of trouble. We also have a lot of songs about the good times, relationships and all that stuff too. It's worked out to be about a 50/50 split between dark songs and more positive songs, at the end of the day we're shooting for impact, loud, soft, light and dark.
What's your method at the time of writting a song??
We either start with a lyric, a phrase, title or general concept first then find some chords that work - or I'll be messing around with a chord progression and find the words after. It works both ways. Most songs happen pretty quickly where we know it's good and worth keeping after 3 mins, although it takes a few weeks, sometimes months, to really tweek the melodies, chords and arrangement until a song is ready to play live.
Which is your music influences??
I like Led Zeppelin, Pink Floyd, Black Sabbath, Tool, late 60's Beatles like Abbey Road. I'll listen to all kinds of stuff though from Slip Knot to Neil Young. At one point I could play almost any Iron Maiden song on bass and drums, but I listen to more song oriented stuff these days. Brian's all over the map too from Incubus, Chris Cornell, Lenny Kravitz to Metallica and Prince. The only things we differ on is I still listen to 80's Metal now and again like GnR, and Brian pretty much avoids that stuff.
What plans do you guys have for the future??
Simply to record some more demo's. I just bought some new gear for my home studio so we can actually get close to album quality. I've been engineering and producing for years and so far what we have sounds pretty close to the recordings we've done in a big studio. Once we finish up a few more songs we'll just gig locally and see where we end up. I've done the release your own album thing with a few other bands, so this time around I'm thinking along the lines of a demo, a single, then wait and see before messing about on a full blown album.

Which has been the funniest prank you guys have been or took part while on tour or after a show??
Nothing crazy with Big Blue X, we usually go home after a show and watch the video and critique ourselves, pick apart the songs on how we can improve them, all while drinking beer.

If you guys were stranded in the middle of nowhere after a show or while on tour. The help is 65 miles away from where you guys are, ¿Who would you guys send to look for help? And if while the rest wait, there's no food and the only way to feed yourself is by eating each other, ¿Who would you eat first?
We're pretty resourceful, we'd figure out a way to catch a bear and barbecue it, or even a rattle snake.
Which country you guys would love to play?
We keep talking about playing in Florida, Brian has some contacts down there. I'd like to play in England cause that's where I was born and it's where The Beatles and Zeppelin are from. And after seeing the Audioslave live DVD in Cuba I put that place on my list. If I was to dream big I'd put Brazil on the list too, why not? And Peru for the hell of it.

With which bands you guys would love to share stage??
It would be silly if we could open for Led Zeppelin, Lenny Kravitz, or even Tool, that would be a good start.

Are you guys OK, with the direction the band is going actually?
Kinda, I think if you are too OK then you stop pushing and developing. Right now it's just me on acoustic and Brian just singing, we'd like to eventually hear our songs with a full band, it's just that this is the way things are working out now, so we're rolling with the punches and trying to make our acoustic songs sound as full as possible. The good thin is playing acoustically has really forced us to get good, especially Brian who had to work a lot harder because there's no heavy guitars or drums to drown out a thin vocal or mask weak melodies.