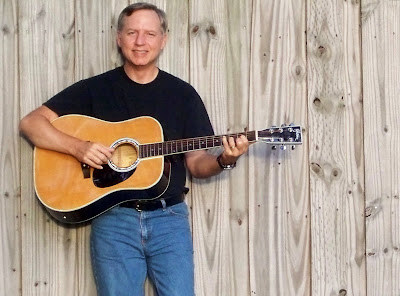 How did you get started with all this??
I am from a musical family. Before I learned to read I found my Dad's harmonica and taught myself a few songs on it. Next I played classical violin and then got the bug to play guitar when I heard the Beatles. I wrote my first song at the age of 19 called “I Love My Car” http://soundclick.com/share?songid=2382052 I dabbled on and off for about eight years and then one day I literally woke up, full of inspiration, and realized that I am a songwriter. At that time I was staying at the Fort Harrison Hotel in Clearwater, FL. Later I learned that Keith Richards had gotten the idea for the Rolling Stones’ “Satisfaction” while staying at that very hotel, fourteen years earlier.

What's the message to transmit with your music??
I like to promote that there is a positive side to every situation.

What's your method at this time of writing a song??
Since I'm flexible as to how to proceed, I wouldn't say I use a method. I have at times started with a phrase and worked the melody and remaining lyrics around that. I have started with a beat or a bass line and built from there. I did recently create a songwriting checklist to add a bit of organization and make sure I don’t forget anything. If any of the songwriters reading this want a copy of the checklist, they can email me at dockendorf2000@yahoo.com and I’ll send it to them at no charge.

Which are your music influences??
Too many to mention here, but some near the top of the list would be Bach, Sousa, Zappa, Beatles, Brian Wilson and Phil Spector. Since I’ve been a bass guitarist for most of my career, I’d have to give tremendous validation to my teacher, Carol Kaye.

What plans do you have for the future??
I plan another CD, tentatively called at this point, All American. I plan to market my music abroad, especially in China. Continue my blog, Backyard Chemist.

Which has been the funniest prank you have been or took part in while on tour or after a show??
I was in a trio in 1971 and we lived together in a rented house in Hollywood. The previous tenants apparently left in a hurry and had left a bunch of stuff including a headless mannequin, a mop, an old coat and a hat. We assembled these in a nook in the hallway to make a weird statue. I should mention that the guitarist was a high-strung guy and easily spooked. One night while he was out for a few minutes, I helped the drummer dress up as the mannequin and kneel in the nook. When the guitarist returned, I got him to walk down the hall to “see something.” As he passed the nook, the “mannequin” followed him. You can imagine the guitarist’s surprise when he looked back – he jumped about three feet in the air.

If you were stranded in the middle of nowhere after a show or while on tour. The help is 65 miles away from where you and your band (If any) are, ¿Who would you send to look for help? And if while the rest wait, there's no food and the only way to feed yourself is by eating each other, ¿Who would you eat first?
Since I’m a solo performer, I’d have to send myself for help. As for what I’d eat, I’d probably start with the fingernails and hair. I hear they’re high in protein.

Which country you would love to play?
I’m not particular as long as the food is ok.

With which bands you would love to share stage??
That’s a hard one because it is a toss-up between Gaga and Jimmy Buffett.

Are you OK, with the direction the band is going actually?
I am happy with my direction as it has gone from doing mostly covers to doing mostly originals.

I'd like to thank Vents Mag for helping expose my music to new audiences. Those interested can visit www.stevedockendorf.com for music and info.
Publicado por Vents en 13:16